Honestly, I think I have all the symptoms recited in this article: http://en.wikipedia.org/wiki/Mania So I think I am eligible to be known as a “Maniac”. But the best part is that – in my opinion – they are all positive characteristics…

Mania has often been thought of as the opposite of depression. It is usually a feeling of well-being, energy and optimism. These feelings can get so intense that the person loses contact with reality. When this happens the person believes in strange things about their personality and they can often act in embarrassing ways and can sometimes even act in dangerous ways.

I don’t know if Iconophobia is really a psychological problem but I liked the idea of morbid alienation toward images, icons and in general, reality.

Meanwhile Sea of Tranquility e-zine has called my Iconophobic album containing “claustrophobic visions” or having an “impression is of an aching emptiness” as a “strong statement from my life in my home city of Tehran”.

Generally I don’t know if this is a prevalent condition among musicians or not… But in the meantime I think for creating such an abstract art like music, I had to balance those odd qualities with unusual amounts of “feeling of well-being, energy and optimism”. Actually to me those are all ways of surviving and breathing in the realm which our eyes perceive as The World – as weird, dark and bright it seems all at once…

Iconophobic is my world and I love it; however dangerous it maybe as DPRP webzine calls: “You need to tread carefully if you are entering the Iconophobic world of Salim Ghazi Saeedi. You have been warned.” 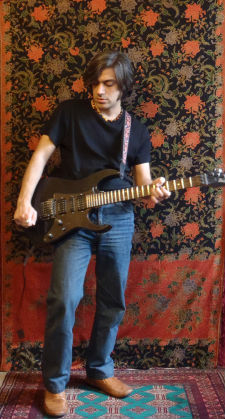 A “progressive” musician knows no border; but it seems that Salim Ghazi Saeedi’s ancestors enjoy hunting him down in his veins!

Iran, Tehran – Salim grew up in Iran; a country too proud of its ancient art. Nevertheless Salim from his early childhood, barely followed Iranian traditional music. But interestingly enough, now after 5 years of music composing and releasing 4 albums mostly in progressive rock, Salim is constantly receiving notions about his Middle Eastern themes and using Persian influences.

The oriental mystery within eastern musical themes along with their dance elements versus raw energy restrained in western rock could result in a thrilling experience. Meanwhile to Salim’s own surprise: “My music listening habit has mostly been focused around jazz, blues and modern rock. I’ve never studied eastern music or dedicatedly listened to such records! Actually if there is any eastern influence discernible in my works, it has happened involuntarily.”

In this regard, one may conclude that as a musician, no matter which genre you prefer or what listening habit you adopt, sometimes you cannot elude your ancestors, who may have hunted you in your veins for centuries! The following speculations on Salim’s latest release, Iconophobic, may testify the eastern lore within Salim’s veins while his ears dignify western tradition:

Iran, Tehran – Rock music is of course not rooted in Iran, but the enticement within the genre has strikingly pierced Salim Ghazi Saeedi’s heart in his hometown. Living in a country with total domination of traditional culture, Salim has globally released his 4th album, Iconophobic. An album as a “strong statement from Saeedi on life in his home city of Tehran” (Steven Reid, Sea of Tranquility webzine, Sep 2010) or let’s say “a stream of conscious story without words.” (Christy Claxton, Stave Magazine, Sep 2010 )

Iconophobic is an instrumental concept album on “fear of the world of imagery”, composed and performed for electric guitar, bass and synthesizers by Salim, hiring various elements of classical, electronic and progressive rock music to communicate artist’s extreme feelings: Satire, bizarre phobias, ecstatic joy and embryonic love are themes of this daydream…

“Pictorial rock”, Salim says “is a term I use for my music that is usually based on series of mental images, a nightmare or maybe dreams of a sound sleep…” In this regard the album is accompanied by visualizations. “… However that as a listener, you have to wait for the pictures to materialize in your mind!” Salim adds. The album is available for purchase at www.salimworld.com . Salim is currently preparing this album for performance with a medium-sized band.

Track Listing
1. Composer’s Laughter
2. A Satire on Hell
3. And My Heart Aches Like 100 Aching Hearts
4. Asiyeh
5. The Songful Song of Songbirds
6. Transcend Ecstasy with Ecstasy
7. Don’t You See the Cheerful Rainbow
8. Music is Haram
9. Dance in Solitude
10. Eternal Melancholy Of Loving Women
11. Give my Childhood Back
12. Breast-Milk
13. I am Beautiful, Are You Beautiful?