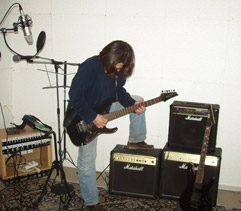 This was Salim Ghazi Saeedi’s unusual answer as a 4 years old boy to the world’s most common question for children! But why someone would like to be a king anyway?! “Among all fantasy and innocent dreams of my childhood I clearly remember why I preferred a king’s profession” Salim says. “Because they could do anything they want; As a child how could I compromise for anything less?”

Growing up in Iran, in horrendous times of Iran-Iraq war and amid heavy censorship of western culture and music, Salim gradually found a way to follow his passion of childhood: He discovered rock and metal musicians are among people who “do anything they want” on the stage… And this scene always had one common background: A “Wall of Marshalls”.

In the age of 20, Salim bought an AVT20. However among all Marshall models, it is a just a cute baby, this model became Salim’s dear companion witnessing his progress in the artistic path. Salim remembers buying his AVT20 Marshall Amp from downtown of Tehran: “They did not let me to open the vacuum package before I pay for it.” Salim says: “I wanted to buy a Marshall anyway and AVT20 was the best model I afforded… After I came home and opened the manual, it read at the first page: They are addictive! My eyes twinkled: I already knew it!”

As a rock musicians in Iran, publishing 6 albums between 2006 and 2012, Salim counts as a prolific composer by many standards – however his environmental limitations has always forced him to direct his music activities toward web presence. “I have always been into Do-It-Yourself culture in general sense of term; but about music production in Iran I had no other choice; ‘cause there has never been a local rock music current around to help my music career to evolve.” During these years the Marshall Amp has been an integral part of Salim’s sound; including its clean sound. Watch him play the song Asiyeh from his 2010 album, Iconophobic: 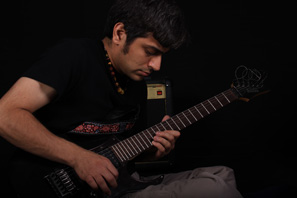 Salim’s music genre has been identified as Rock in Opposition and Avant-Prog by many critics. But how an isolated musician is capable of pursuing his dream for years without giving in to his local limitations? “I can never disregard the impact of warm, multidimensional and truly addicting sound the Marshal Amp has as a self-motivation in all these years. Enjoying the instrument’s sound is an important encouragement for practicing more especially when – like in my case – you face the ordeal of doing every aspect of musicianship by yourself!” Salim continues, “Equipped with a Marshall I can hire a wide range of dynamics that is an important part of my guitar playing style. Moreover this amp makes me to feel an electric animal under my fingers – as it unbelievably responds to all levels of dynamic in playing.”