I am timelost. Amir Reza Koohestni’s play, “Timeloss” took me to 12 years earlier, the time I was despaired and depressed. I had a lost love (maybe alike Amir’s own story depicted at play’s comments in his website) and a semester took off as I did not like to continue at university. I discovered “Dance on Glasses” play from Reza Ashofteh’s review in Shargh newspaper and went to see it. I went to see in 7 consequent nights. I was so emotional, so recorded a few improvised electric guitar parts I had played being affected by the play.

Now I am recalling those days because of Timeloss play. I guess I am timelost… 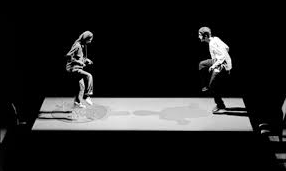 I think nothing is more moving, deep and affecting than encountering one’s self. On Dance on Glasses stage I encountered myself and so within these years it has remained in my head as a sound yet cautioning dream…

Cautioning against the truth that we are lost. I have never found myself belonging to my time and place. Maybe like artists belonging to a time sooner or later than theirs…

I have no homeland, idol or memory. Sometimes I fall in love with things and people and I get busy myself. The same as I fell in love with Dance on Glasses actors whom I sought in Timeloss play. But they were not there.

I am lost. Among homelands, idols and memories. Like Timeloss characters that are lost among themselves, their recorded pictures and time.

Before going to see Timeloss, make sure to see Dance on Glasses too and of course it is your own problem if this play has not staged within past 8 years. Maybe you have to go back in time. Just be careful to lose no more!

Did you know that Sovereign album has an unofficial full title as “Sovereign, as sung by a jester” mentioned in its CD booklet? Now Gerald Van Waes at “Psyche Music” has added an interesting new angle to this concept:

It is a shame because here we hear a composer’s vision with an open mind, and with an open progressive sound and compositional evolution, the elements are free within its limitations, as if getting a professional vision trapped within an amateurish situation, the position of a joker amongst kings showing a different way, not able to lose its own small position. (Sovereign album Review, “Psyche Music”, Gerald Van Waes, Nov 2011)

Well… I guess this is obvious that I – as the composer of this album – am the jester (or joker[1]) reciting the story[2] and I truly have found myself in this “small” position… Actually it is not because I enjoy this position or not. It is how I have born – in Iran where even ordinary people prefer to mix myth and reality even in their daily matters… Maybe this is the same reason that made Ferdowsi to write “Book of the Kings” (Shahnameh) and then inspired me to record “Sovereign”… I guess it is worthwhile to mention the quote from Jean Cocteau, that is also put in Sovereign album’s booklet:

Respectively this jester/joker has also found himself singing in progressive rock genre in a country with no understanding or support of it. And as Gerald put it he is “trapped within an amateurish situation”…

But here lies a secret… As self-awareness makes one able to discover the whole wonder world within his self – letting him to make the myth, history.

Listen to Sovereign album here. Thanks Gerald Van Waes at Psyche Music for opening up this perceptive!

[1] Don’t miss the song Joker at Abrahadabra album, which has become the highest rated song among all Arashk tracks on iTunes!

[2] Apart from the instrumental story of music there even exist a textual story at 2nd and 3rd pages of the booklet.